After a very public fall from grace, a Major League Baseball legend, has dedicated his life to preaching the Gospel and sharing a message of redemption. Darryl Strawberry became one of the biggest stars in baseball in the 1980s and 1990s, until his career was derailed by drugs.

Drafted by the New York Mets, Strawberry was the 1983 National League Rookie of the Year. With a powerful swing, he hit 26 home runs and propelled himself into the national spotlight.

“I was at the height of my career, but I was broken. I was miserable. I just signed a 20 million dollar contract and I wasn’t happy. My family was falling apart.”

Heavy drinking, cocaine use, and a rocky marriage were all part of a recurring series of incidents for Strawberry. In 1987, his first wife, Lisa, filed for divorce on claims that Strawberry broke her nose. Three years later, he was arrested for assault with a deadly weapon during a fight with Lisa, according to Strawberry’s website.

For much of the 1990s and early 2000s, Strawberry was in and out of drug treatment centers. His faith, he said, was far from when he says he became saved in 1991. Two battles with cancer also proved to be a spiritual test.

“I think a lot of times people come to Christ but there is no discipleship. And you miss the importance of finding out the purpose in who you are and who God is. And a lot of us go back to our old familiar place because that’s what’s comfortable.”

After four World Series title wins, legal troubles cut short the outfielder’s career in 2002. After playing for the Mets, Dodgers, Giants, Yankees, and a stint in the minor leagues, Strawberry served 18 months in prison for probation violations. 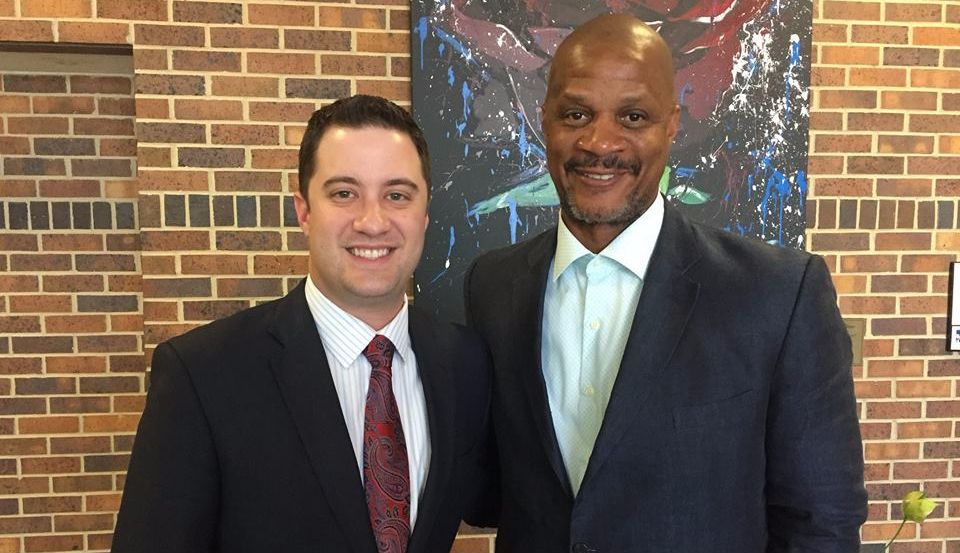 Fighting substance abuse and being a self-labeled “womanizer,” his life took a new path at a Narcotics Anonymous convention, where he met his wife Tracy.

“God uses people to bring other people to the purpose of why he created him. Tracy was the biggest pieces of my life leading me back to the cross and loving me right where I was at. And just growing together, we both became all that we needed to become. We’re still not finished.”

Together they’re taking this ministry on the road and helping people around the country find their way through the Gospel.

“Most people need to understand that Christ is the one you’re looking for,” Darryl said. “We look for all these other things to make our life feel good and be happy. But there’s nothing but emptiness in stuff.”

Strawberry Ministries’ recovery programs incorporate biblical counseling to treat addiction and mend marriages. The couple draws from their own experiences with learning to love oneself, healing, and redemption.

“What you’re looking at is a miracle because I entered in with God. If you don’t enter in with God, then he can never show you the whole purpose of you. And he’s just waiting. He’s waiting for people to understand that.”

Now an ordained minister, Strawberry says he’s not worried about his legacy as an athlete. His focus is bringing hope to others.

“It’s not until you get into a personal relationship with Jesus Christ for yourself, to get to know him, so he can show you who you are and why he created you and purpose of you living here.”

He doesn’t shy away from his past sins.

“I wouldn’t do a do-over because everybody has a journey in life. And we have to realize some journeys are different for other people — journeys are in life. But God has a plan. Because when you look through the Bible they all had issues and they all had struggles and they all didn’t obey God. And it was until they started to obey God. So my journey was the journey of not obeying God and knowing that God had a plan for me but getting into line and only obeying God. And now you see the revelation of my life because when you obey God your life turns into goodness for him. It’s not for people, you know, for people to understand that they can have the same thing.”

The Strawberry’s have been together 14 years and have nine children.

“God changed me forever and I’m so grateful. I’m so grateful for his love his grace and mercy. What a privilege it is to be able to do his will and work for him.”

In addition to their ministry, the Strawberry’s also founded a recovery center in Orlando, Florida.

The views expressed in this blog do not necessarily reflect the views of KLTV/KTRE-TV or Raycom Media.  They are solely the opinion of the author. All content © Copyright 2017 Lane Luckie