In the two months since the announcement that Pope Benedict XVI had chosen a local priest to become the fourth bishop of the Catholic Diocese of Tyler, Reverend Monsignor Joseph E. Strickland has kept a whirlwind schedule.

Through his blog, “Run Father Run,” Bishop-elect Strickland has provided an inside look at his latest spiritual journey that began with his appointment on September 29. Frequent posts have detailed trips across the country for meetings with other Church leaders, guiding the spiritual growth of East Texans through retreats and services, and even dedicating a new church.

The “Busy Bishop Elect”, as he calls himself in the blog, has kept the interim rooted in prayer. “All of this reminds me that saying to people “please pray for me” is not merely a way of responding to their kind greetings and congratulations. Indeed “please pray for me” should resonate through my ministry as bishop and profoundly remind me of my great responsibility to always follow with “as I pray for you”. Only in prayer can we begin to fathom even the tiniest elements of the wonder of Jesus Christ in His Church,” he posted. 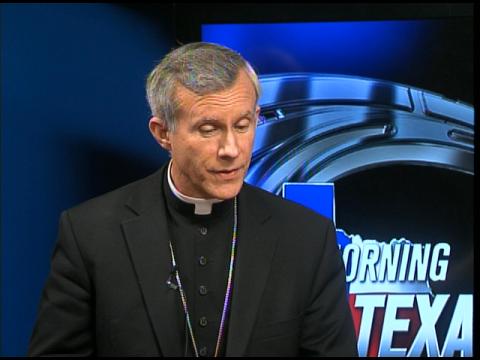 Tuesday, one day before his ordination, Bishop-designate Strickland will appear on Good Morning East Texas in a live interview. The bishop-elect will discuss his experiences since his appointment, explain his role to the nearly 80,000 Catholics living in East Texas, and share a message with non-Catholics.

Strickland succeeds the Most Reverend Alvaro Corrada, who departed the Diocese of Tyler in July 2011. Corrada had overseen the Diocese more than a decade until being installed as the second Bishop of Mayaguez, Puerto Rico in September 2011.

A native of Atlanta, Texas, Strickland previously served the Diocese as Delegate of the Apostolic Administrator and chaplain of Bishop T.K. Gorman Regional Catholic School. “Father Joe” as he is known to many, was ordained to the priesthood in 1985 and assigned to the Cathedral of the Immaculate Conception in Tyler. He has also been assigned to church parishes in Nacogdoches and Mount Pleasant, according to the Diocese website.

Bishop Strickland will be ordained to the episcopacy Wednesday by His Eminence Daniel Cardinal Dinardo, of the Archdiocese of Galveston-Houston with Bishop Alvaro Corrada, of Mayaguez, Puerto Rico and Archbishop Michael J. Sheehan of Santa Fe, New Mexico. The service will begin at 2 p.m. at Caldwell Auditorium in downtown Tyler. Due to limited seating, tickets were distributed in advance through a drawing.

Others wanting to watch the ceremony have several options: a live stream on the Diocese website, via cable TV network EWTN, and on these broadcast stations. Also, the Diocese said screens will be set up in Carney Gym at St. Gregory School and at the Chapel of Saints Peter & Paul in Tyler.