What a great privilege to spend an evening celebrating my former professor, Raymond Strother. The famed political consultant, author and journalist is retiring as the Erbon & Marie Wise Endowed Chair in Journalism at Northwestern State University.

The university held a retirement reception for Strother on Saturday, April 28, 2018 at the NSU Alumni Center. Former students, friends, family members, and colleagues enjoyed hors d’oeuvres and told stories as the Sun set over the picturesque campus. In recognition for his many contributions, the Department of New Media, Journalism, and Communication Arts named its writing lab in Kyser Hall in Strother’s honor. 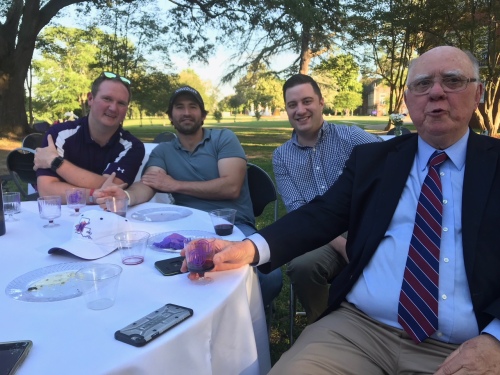 Due to his generosity, so many young journalists have a greater appreciation of the First Amendment, the pursuit of truth, and the power of the written word.

I’ll be forever grateful for his helping make my education possible through a scholarship from the American Association of Political Consultants. In the classroom, he challenged me to develop my writing skills and pushed me as an aspiring journalist.

The views expressed in this blog do not necessarily reflect the views of KLTV/KTRE-TV or Raycom Media. They are solely the opinion of the author. All content © Copyright 2018 Lane Luckie