Many broadcasters spend their careers moving from city to city, hopping among newsrooms until they find the perfect fit. Very few people can say they’ve worked in any industry for nearly 50 years, let alone spending 44 years in one company.

Veteran journalist Joan Hallmark is celebrating an extraordinary tenure with the KLTV and KTRE news team. An East Texas native, Joan Hallmark got her start at KTVT Channel 11 in Dallas, hosting the ‘Joan Hallmark Show’ at a time when very few women held on-air positions. 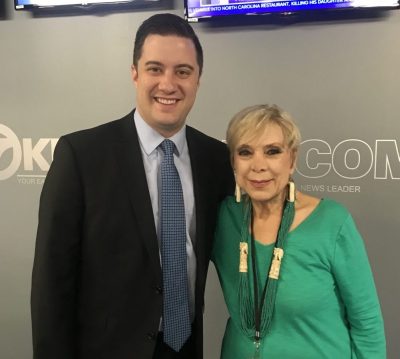 A short time later, she came “home” to KLTV in Tyler, Texas, where she continued her work as a pioneer among women in the television industry.

Her reporting has taken her around the world and earned recognition with an Emmy Award from the Lone Star Chapter of the National Academy of Television Arts and Sciences.  She also was selected to cover Queen Elizabeth’s visit to Texas.

A skilled interviewer, Joan has profiled hundreds of headliners over the years. Some of her more notable interviews, including some of the biggest names in pop culture and contemporary American history, are featured in her 2012 memoir, Sound Bites. Her list of exclusives rivals that of any network journalist: Clint Eastwood, John Wayne, Charlton Heston, Matthew McConaughey, Sonny & Cher, Sammy Davis Jr., both Presidents Bush, Nancy Reagan, Julia Child, George Foreman, and Willie Nelson, to name a few.

Celebrity interviews, while exciting, aren’t at the heart of Joan’s passion. Telling the stories of war heroes and everyday East Texans is where she shines. Joan is perhaps best known for her ‘Proud of East Texas’ and ‘Freedom Fighters’ series, which have been recognized by the Associated Press, American Cancer Society and the Vietnam Veterans Association.

She and her husband will be moving to the Austin area to be closer to their son and his family.

On a personal note, I can’t tell you what a privilege it’s been to learn from this legendary journalist. A master interviewer and gifted storyteller, Joan’s creativity and kindness are hallmarks (pun intended) of her style. I think most of all, I’ll miss seeing her smile beaming across the newsroom. It’s a tremendous honor to occupy the anchor chair she once held on the morning news. We’re ‘Proud of Joan Hallmark,’ her many accomplishments, and will be forever grateful for her example and friendship.

The views expressed in this blog do not necessarily reflect the views of KLTV/KTRE-TV or Raycom Media. They are solely the opinion of the author. All content © Copyright 2018 Lane Luckie